Obama honors Anthony Bourdain: he made us “a little less afraid of the unknown”

Former President Barack Obama offered a touching tribute to Anthony Bourdain, who died Friday at the age of 61. Obama tweeted about a meal he shared with the chef, author, and television host in Vietnam in 2016 and honored him for his efforts to “make us a little less afraid of the unknown.”

During a trip to Vietnam in 2016, Obama sat down with Bourdain for his CNN travel and food show Parts Unknown. They ate noodles and drank a beer at Bún chả Hương Liên in Hanoi, the capital of Vietnam. The meal cost $6.

“‘Low plastic stool, cheap but delicious noodles, cold Hanoi beer,’” Obama tweeted on Friday in the wake of news of Bourdain’s death, apparently by suicide. “That’s how I’ll remember Tony. He taught us about food — but more importantly, about its ability to bring us together. To make us a little less afraid of the unknown. We’ll miss him.” 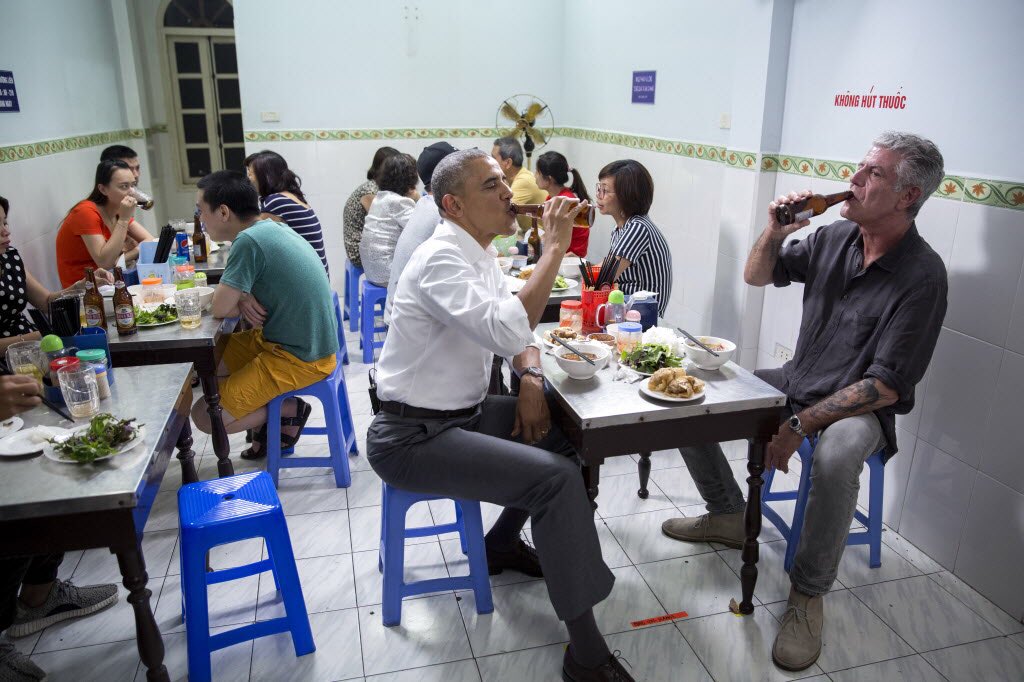 Bourdain appeared to have remembered their meal fondly as well. He posted about it on social media soon after it took place, joking on Twitter that he had picked up the check.

Total cost of bun Cha dinner with the President: $6.00 . I picked up the check . #Hanoi

2,994 people are talking about this

He told CNN’s Anderson Cooper that year that the White House had reached out to his team about a potential appearance — an opportunity he welcomed, assuming it was done his way.

“For whatever reason, [President Obama] seemed willing to play, and my feeling was, if we’re going to do this, we should do it right,” Bourdain said. “I mean, we shouldn’t be sitting in a banquet room at the Hilton. We should do what we do, which was hang out in some working-class place.”

He remembered fellow restaurant-goers’ reaction to the president’s appearance. “They flipped,” he said. And, really, one of the great things that came out of it was the reaction of ordinary Vietnamese people.”

Bourdain also wrote about his experience with Obama in a piece for CNN:

What can I tell you about what it’s like to sit across from the President of the United States and drink beer from the bottle?

I can tell you that Barack Obama was, in spite of having had a high-ranking leader of the Taliban whacked in Pakistan a few days previous, very relaxed and at ease. He seemed to enjoy himself sitting on a low plastic stool eating noodles and pork bits with chopsticks.

I talked to him as a father, as an enthusiast for the region, and he responded with real nostalgia for the Indonesian and Hawaiian street food of his youth.

When I asked him if it was OK that I get along with Ted Nugent, who has said many, many deeply offensive and hateful things about him personally, he responded “of course” — that that was exactly the sort of person we SHOULD be talking to: the people who disagree with us.

He was oddly resigned to and forgiving of his enemies. And when I asked him if — given the very likely ugly and frightening contents of the daily intelligence briefings to which he is privy — if it was “going to be OK” for my daughter as she grew up, he replied with confidence that on balance, it would.